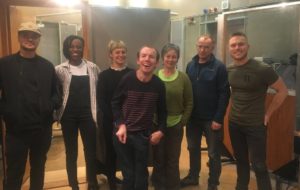 The pilot episode of my Radio 4 sitcom, Ability, is now available to listen to on the BBC iPlayer. I would just like to thank everyone who has helped me make this.

My co-writer, Katherine Jakeways, and my producer, Jane Berthoud, were an invaluable source of knowledge, experience and support. The cast were all top class, were so much fun to work with, and they were the ones who made it sound as good as it did. And, of course, thank you to everyone who has supported my silly idea to do comedy for the past five years.

I had so much fun writing and recording this pilot episode, so I hope you enjoy the finished product.Bonus points if you can spot my subtle nod to the League Of Gentlemen If you do enjoy it, you can tell Radio 4 how much you loved it on their feedback page. I also took part in a Q&A session about my sitcom which you can read below.

Meanwhile, you can read my blog post for the Huffington Post about disability and the media. I also had a chat to the guys on the BBC Ouch podcast about making my sitcom.

I’ve just listened to the Radio 4 sitcom, it made me laugh out loud. How did it come about and how long did it take to write?

The sitcom came about because I won the BBC new comedy award a few years ago, and part of the prize was the opportunity to write something for Radio 4. the writing process started about two years ago, but I've had the idea for the sitcom for quite a while longer. So it's nice to be given the chance to make it. I'm very grateful to the BBC for all the support they have given me.

Did you co-write it and had you worked together before?

Yes, I co-wrote the sitcom with Katherine Jakeways, who has worked on some incredible stuff on the past, so I was really looking forward to working with her.  We hadn't even met previous to this but we just clicked straight away and got on really well. I loved working with her because she made the whole process so easy. It was also nice to have someone more experienced guiding me along the way. She has taught me a lot.

I loved the ‘eyes down’ ticking things off on the bingo card – ‘your sort being given spliffs’ and of course ‘Stephen Hawking’ – is that something you do in your head anyway on a daily basis?

I'm quite used to people saying stupid things to me now, so I don't think I notice myself doing it as much anymore.  It definitely provided me with lots of material for the sitcom though, so I'd like to thank those stupid people for asking stupid questions.

One of my favourite sections was when you’re tackling the drug dealer – and he asks if you’re angry.  There must be times when you long to shout at someone and that posh, polite voice comes out?

It's certainly very hard to show emotion while I'm speaking because my voice is very monotone indeed. So I usually have to rely on body language to get my point across.  On the bright side, it's probably saved me getting into lots of arguments as well. Simply because I have been too lazy to type out a long response or, by the time I do, the moment has passed.

Also love the fact you talk about sex and disability in Ability – why are comedians so afraid to tackle these areas?

I've seen quite a lot of disabled comedians talking about sex and relationships. I think the problem is that not many of them are seen in the mainstream media, so the topics don't get enough exposure. I think that's changing a bit now with shows such as The Last Leg and the success of the Paralympics.  But there's still a long way to go until these subjects can be discussed freely by everybody. At the moment, people just don't have much first hand experience of disabled people.

Can we look forward to a series of Ability?

I really enjoyed writing and recording the pilot, so it'll be great to do more. I guess we'll just have to see what happens.

I loved the way we’ve got the Geordie voice in your head and your tech voice – tell us about that – again is that how it is for you in everyday life?

The idea behind the head voice was the simple fact that I don't sound like a machine when I'm thinking. So we thought it would be nice to have both, and have them bounce off each other a bit. I think it's helped make the sitcom better. If I'm honest, I'm not sure what I actually sound like in my head. I've never really thought about it.  I'm definitely not as posh in my head though!

It’s got your fictional mum and dad in it – have your real parents heard it? What do they make of your career in stand up? They must have encouraged you to be independent from a young age?

My parents have always been very supportive and encouraged me to be independent as possible. This started when I was at school, then they helped me go to college, then leave home and go to university, and so on. I don't think I would be the person that I am without their support.  They still think I'm a bit mental for wanting to be a stand up comedian when I can't even speak though. And I think I agree with them. To their credit though, they've still supported every crazy decision I've made since. Hopefully I can continue to make them proud.