Join Britain’s Got Talent winner, Lost Voice Guy, as he brings some of his favourite comedy acts to the North East for his regular comedy night, The Lost Voice Guy Comedy Showcase. 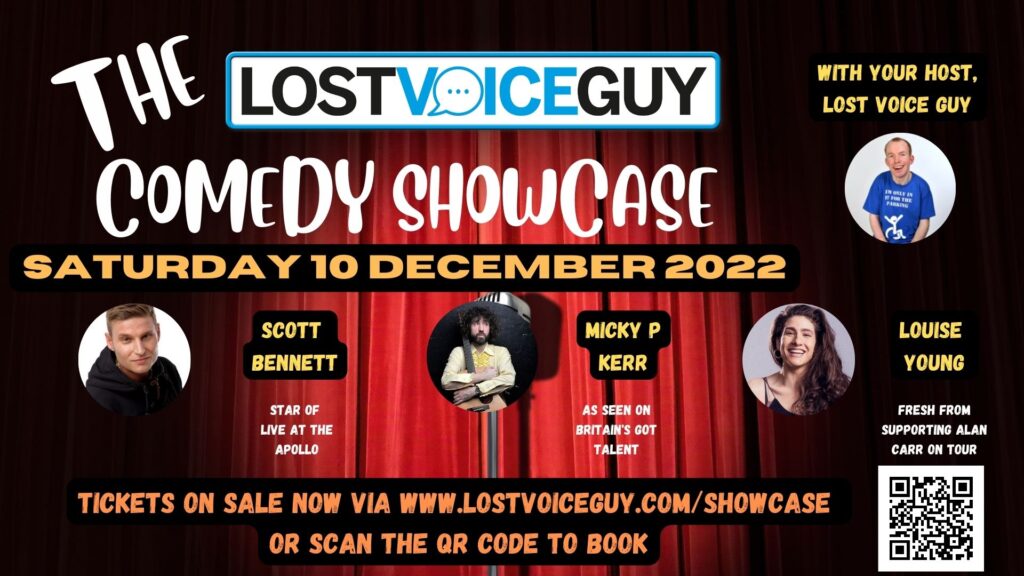 The Lost Voice Guy Comedy Showcase returns for another evening for laughter, just in time to start your Christmas festivities in style.

Joining Lost Voice Guy in December will be one of the best comedians to emerge from the comedy scene in the past few years, Scott Bennett.

After appearing on Live At The Apollo last year and wowing the audience, Scott’s career has skyrocketed ever since. A versatile and confident performer, he headlines many of the most established clubs including the world-famous Comedy Store and The Glee Club.

During the lockdown of 2020, Scott pioneered the viral hit, Stand up from the Shed, a weekly topical live streamed stand up show from his actual garden shed. He has also supported Rob Brydon on his UK tour.

Also on the bill is star of Britain’s Got Talent, Micky P Kerr.  The Leeds-based comedian and musician is a breath of fresh air on the live comedy circuit. Fusing together music, spoken word and comedy, with his tongue often planted firmly in his cheek, Kerr has been described as “the spawn of John Cooper Clarke”.

In 2018 Micky entered Britain’s Got Talent, where he proved to be a massive hit with both the public and the judges, making it all the way to the final, which was watched by almost 11 million people.

Completing the line-up is one of the best up-and-coming comedians in the North East, Louise Young.

This will be a BSL-interpreted performance.

*Line-up is subject to change.

When I met Ross Noble. Still one on my proudest moments 😂😂 ...

How did I lose my voice? Ask me more questions in the comments! ...

Sheeeeesh, save some fashion sense for the rest of us! You look awesome, hope you had a great time!

You scrub up well, Have a wonderful evening looking very dapper 🎩 Xx

Very smart! Have a great night

Nice outfits! You both look great! Have fun!

Looking well dapper the pair of you. Have a blast.

Very smart. Hope you have a great evening. 😊

You scrub up well, very smart. Enjoy your evening💙

That colour really suits you sir!

Looking spiffy in that suit! 😊

You make everyone look underdressed man!!! You rock 🤘

My Christmas Comedy Club on ITV 1 is mentioned in this list of wonderful Christmas telly, which is nice! Tune in on Christmas Eve or Santa won’t come…. ... See MoreSee Less

Best Christmas TV for 2022 – your guide to what to watch

Definitely going to watch this looks so good

Wish I could see it here in the USA 🎄

You are so funny

This week is the 2nd anniversary of the Communication Access symbol. As patron of Communication Matters, I believe that people with communication disabilities should feel included by society, which is why I support #communicationaccess training – a free inclusive communication tool. Please sign up today: ... See MoreSee Less

I've signed up and have passed it onto my boss too!🤞👍

Had a lush night at Eva’s Ball raising money for Birmingham Children’s Hospital with @eva_abley @jamieleahey01 @tomballofficial @bennicklesscomic and @borntoperform.danceandcare. Thanks for the invite, Eva! ... See MoreSee Less

Thank you so much for being part of our incredible evening. It really was a night to remember 🤩

Can't wait for you all to see my Christmas Comedy Club on ITV 1 on Christmas Eve! Check out who's coming to join in the festive cheer! ... See MoreSee Less

What time is it on?💕

Looking forward to this 👌🏻

Had a great afternoon watching it being recorded.

Can't wait,welcome relief from all the year's doom & gloom.

Looking forward to it!

Get a shout out from me on Memmo! Link in the comments! ... See MoreSee Less

Hi Lee can you give a shout out our company Disability Expo please were trying to raise awareness of disability pride month and our #IMatter movement. We would love for you to be involved too 😁

Love you lost voice guy, you are an inspiration to us all xx

Fab idea - I looked up to see if we could book you for our charity 45th anniversary and so wish we could afford you. Really fantastic initiative Lee.

This is hilarious 😂 you're amazing Lee x

Hi Lee, I was expecting your great Geordie accent. What happened?

Very impressive! U are so amazing

Thanks for always bringing a smile to my face.

Hi Lee how are you xx

Hi there you are great .

This is why I never go to the post office… ... See MoreSee Less

Well thanks for that one you made me laugh so much you almost made me choke on my water! 😂

I used to be able to do the "Cashier number 1 please" announcement so good that people would react when in line 😂😂. I can still do the voice the same but I think the person's changed since 🙄😅😅

Love your T-shirt too xx

What does his shirt say

You use your new "voice" now?

Good view mate. Not always guaranteed with the city hall. 🤣👍🏻

When are you coming to Grimsby?

Would have been amazing if you had taken from him and just dropped it. BOOM !!!

That's probably the most awkward moment in his life, but tbh it was probably a reflex.

When are you coming down to Cornwall? Or Devon? Xx

I love to know what was said through that earpiece lmao 🤣 😂 😆

I didn't notice this on the night till it was shown like this. Still would of done well picking up laptop sound 🥰

You are amazing xxxx

all those years of habitually giving microphones to people.. he'll be second guessing for decades now!

The question is, what was someone saying in his ear? Was it only about the mic or ... ?

PMSL. He could have done it for real as a joke or pointed it to the machine but we wouldn't have got the look on his face.

Omg 😂 i remember this!!!! Comedy gold

When you really wished Will Smith had invaded the stage an slapped the mic out of yer hand.....Oh Declan.....🙈🤣

Bless him. Obviously, someone was saying something to him through his ear piece.