You can now listen to my first book, I'm Only In It For The Parking, along with lots of other content from myself on Audible.

I'm Only In It For The Parking - audiobook 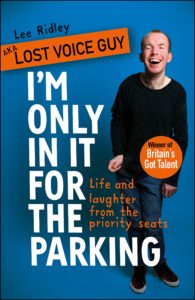 What’s the worst thing about being disabled? Is it the shameless staring? Is it that people assume you’re a bit thick because you can’t speak? Or is it the fact that your friends always take you to theme parks just so they can jump the queues?

In fact, it’s the stupid questions that really rile Lee Ridley, aka Lost Voice Guy. And over the years he’s been inundated with them, from people who have failed to engage their brains before opening their mouths. Which is where I’m Only In It for the Parking comes in – think of it as a disabled FAQ, with funny (sometimes painfully funny) stories from Lee’s less-ordinary life.

If you think you know what it’s like to be disabled, prepare to have your perceptions skewered by the much-loved Britain’s Got Talent winner, the brilliant stand-up who struggles to stand up, the Geordie without the accent. And before you ask … no, he really can’t speak at all. But he definitely has something to say.

Think of it as a disabled FAQ. I’ve been asked countless stupid questions about my disability over the years, from ‘What’s it like to be disabled?’ to ‘Can you really not speak?’ In this book, I will use the best of these questions as a jumping off point to tell funny stories about my less than ordinary life.

You can also listen to my previous recorded Edinburgh Fringe shows on Audible as well. 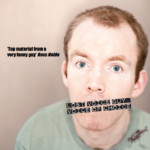 Having nothing to say is one thing, having lots to say and being unable to say it is quite another. It has become part of life for Lost Voice Guy but although he can’t talk, he isn’t silent. Diagnosed with cerebral palsy as a child, he embraces his disability, really breaking down barriers and having a laugh along the way. He uses his iPad to great comic effect to take us on a journey as he tries to make himself heard.

Laughter Is The Worst Medicine (2014) 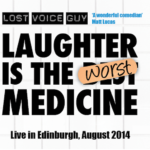 When Lost Voice Guy was rushed to hospital during this first ever Edinburgh Fringe, he nearly died. In fact, he became as silent as the ‘P’ in pneumonia and ended up with 99 more realistic problems than Jay Z.

Stuck in bed and miles from home, he began to wonder if laughter really was the best medicine after all. Then he had morphine and he realised it wasn’t. Jesus may walk on water, but Lost Voice Guy runs on batteries. And he recharged and rose again to tell the tale in this new show.

Disability for Dunces: Volume One (2015) 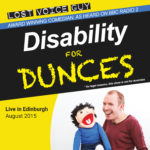 Can you really not talk? Have you considered an exorcism? Are you just in it for the parking? Are you as clever as Stephen Hawking? How do you have sex? Seriously, can you not talk at all?

These are just a few of the bizarre questions that award-winning comedian, Lost Voice Guy, gets asked on a regular basis. Now he’s decided to answer them all for you in this show. Think of it as being like a disabled FAQ for stupid people.

Lost Voice Guy – aka Lee Ridley – has a form of cerebral palsy which leaves him unable to speak, but he now performs to sold out crowds using his voice synthesizer app. This set, recorded at the Edinburgh Comedy Festival, is one of his most honest, open and hilarious to date. Lee takes on subjects including the perception of disability in the media, government cuts, and the painful reality of dating and love.

This podcast includes an interview with Lee by legendary comedian - and close friend - Ross Noble. Fun fact: the pair first met after Lee challenged him on who could do the best impersonation of Stephen Hawking....

If you enjoy listening to them, you can also watch them as well. DVD versions are available to purchase in the shop.